Mr. Shankarah Lessey, is an alumnus of the MBA in International Trade Logistics and Procurement (MBA ITLP) programme at UWI-Arthur Lok Jack Global School of Business, Senior Project Engineer at HDC, and author at Archway Publishing. We asked Shankarah to tell us what his experience was like throughout his enrolment at Lok Jack GSB, and on his current position. Check out his responses below:

5.30pm (or later if you were stuck in traffic!!) Dinner in the cafeteria.

The arrival times at the Lok Jack GSB Campus was notoriously varied across the student body with students coming from as far as Chaguaramas or Port of Spain after a hard day’s work. The well-stocked cafeteria was always my first stop before heading off to an evening of classes in the MBA ITLP Programme. Sada Roti, Aloo pie and sometimes pizza were all very welcomed treats that filled the corridors with lofty aromas that served to ease our daily stresses prior to starting our evening lectures.

We often found ourselves in the large YARA Auditorium on afternoon sessions that tackled global issues in a local context with varied experts being invited to present to the student body, keeping our focus on making that impact in the industry and placing our studies into context. The seminars ranged a wide group of relevant topics such as climate change, the future of the oil and gas sector, public-private partnerships and waste-to-energy technologies in the Caribbean. These were all presented in a global setting but grounded in local and regional research in order to retain its relevance to the population.

I was always pleasurably intrigued by the depth of the MBA ITLP Programme and the connection the faculty had with industry which showed in the lectures and exams. The entire faculty was clearly guided by overarching policies that spoke to industry relevance, a relevance that came out in the frequent guest lectures from technical and executive personalities across industries of oil and gas production, port management, shipbuilding, Exim Bank and even from past students who currently act as ambassadors in their current workplace for the Lok Jack GSB.

It has been really difficult to move on from the enjoyable life at Lok Jack GSB Campus, back to a work life that isn’t supplanted with daily lectures and monthly assignments from the semester’s group of lecturers. The most memorable part of the MBA was the International Business Trip in Shanghai, China organised by our Programme Director Dr. Khan. It was the experience of a lifetime, a different culture, business environment, trade zone and language was the ultimate MBA experience that connected all my learnings for the two-year programme and put it to use on a global scale in an international environment with other practitioners from across Latin America and the Caribbean, Africa, China and Europe.

Currently, I have been accepted to Oxford University and Kings College London for different further graduate programmes that I am currently considering to pursue while I seek to publish my first print and digital books in August 2019. The MBA ITLP from the UWI-ALJGSB was truly an unforgettable experience that fully prepared me for the global business environment imparting the confidence, skill and focus that is needed in order to break into the global business environment.

On Tuesday 7th May, the 2019 cycle of the Alumni Mentorship Programme was launched.

With over 40 mentors and mentees in attendance, this interactive and informative session served as an introduction between mentors and mentees. Students and Alumni were able to interact, network and engage in fruitful discussions on their goals, not just for the short term, but also on where they would like to see their careers go as they complete their degrees at the Arthur Lok Jack Global School of Business. 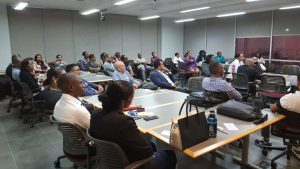 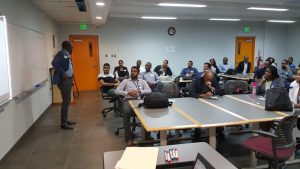 Ms Anya Narine Maraj and Mr David Roberts, who are previous mentors, facilitated this year’s launch event. They both gave guidance and tips to the new mentors and the mentees on setting SMART goals, being realistic in their expectations and generally, on developing a mutually beneficial working relationship going forward.

The Alumni Mentorship Programme is an initiative of the Lok Jack GSB – Advancement and Alumni Relations Centre and is conducted annually for a period of six (6) months. This year’s cycle will run from 7th May to 25th October 2019.

The objectives of the A.M.P are: 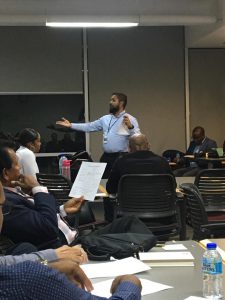 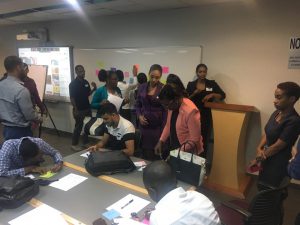 As with nature, the strongest survive by adapting to change. Darwin’s Theory of Evolution and Natural Selection explained this concept. In the natural world, however, this change happens slowly but surely.   Change by itself is not bad; it is the adaptation to change that is difficult. In the natural world, this slow evolutionary change sometimes takes the pain out of the adaptation process.

Fast forward now to the world of business. Change is rapid in all aspects of business. In the world of technology, we have Moore’s Law, which is the observation that the number of transistors in a dense integrated circuit doubles about every two years. Seemingly an inconspicuous observation? Don’t be fooled by its apparent simplicity. This very observation is what causes all of us to be glued to our mobile devices and access so many services electronically which was not even a dream 10 years ago. So most of us cope with this change by accessing services and goods online at our convenience. We have learnt how to use social media and electronic/online games and have identified addictions to them. Companies and individuals that do not adapt quickly are relegated to oblivion. It has nothing to do with size; in fact the bigger they are the harder they fall.

So what does all of this have to do with education and productivity? While all of this change has been taking place in the world, some things have remained static. What is the purpose of education? The curricula of the various disciplines have changed from pre-primary to the tertiary level. But have we prepared our students to deal with the psychological stresses that might be peculiar to every generation? According to Ralph Maraj in the Express of May 5th 2019, the education system annually churns out thousands who are ill prepared for adulthood. How does the education system prepare one outside of academics to enter the world of adulthood with all the psychological burdens that come with it? How did previous generations manage? I have no doubts that previous generations would have dealt with various personal and societal upheavals and stresses. But was the stress in a less technological and socially connected world different from that of today?

This goes beyond the stress of examinations only. This has nothing to do with any individual examination such as SEA or University, but generally on preparing students to be productive citizens in the real world outside of academics.

If we are to consider ourselves beings of higher intelligence, then it is necessary for us to refine our education system and teach our students, from the preprimary right up to the workplace, how to deal with the pressures of our modern day life. Just as adults need help with certain aspects of stress, so do children, students and employees. Unproductive behavior may just be a symptom of something deeper.

Isn’t it time that we began to formally deal with coping mechanisms for children from the young age all the way to University? Would this intervention have a positive impact on our society as a whole? It has been proven in several studies that apart from the formal education, a nurturing and supportive home environment greatly increases one’s chances of succeeding in school. Armed with this knowledge we can now innovate and take the argument one step further to formally engage students in stress management and coping mechanisms. Would this lead to better performance at school, less delinquent behavior and produce an individual better prepared to enter the productive world of work?

We have several complaints about the lack of productivity. What is the reason for the poor work ethic? Are the problems purely organizational? Is there any room for individual responsibility? Does it have to do with education? What separates a developed country from a developing country? Is it mindset? What causes this inertia? How does one deal with mindset on an individual basis, an organizational basis and at the country level? Is it a deficiency somewhere along the line in our education system that has caused some to fall through the cracks? How do we now address this?

There are several studies on motivation and leadership and the personality types that shapes an individual’s point of view.  The knowledge and capability to enact such an intervention into the formal school system is already there. The hindrance might just be the logistics at this time. Would such an intervention change our education system from being highly individualistic to more all-inclusive? Time would be the best indicator of this. But if we are creatures of higher learning then shouldn’t we put all of this productive knowledge to some use that gives us some type of competitive advantage? I have no empirical evidence to quote on this, but the idea does not seem so far – fetched to me.

It is not about an entirely altruistic proposal. In the long run, it is about helping society to adapt to the Darwinian Theory which has been greatly sped up outside of the natural world. The society would not fail as a whole, but it is my theory that by this formal engagement of a stress management programme from the school level we are better preparing the future generation for success. Who knows what the new world of Artificial Intelligence, Self Driving cars, Pilot- less planes, Robotics, Inter- planetary travel and unimaginable plastic pollution would unleash on the future generation? What are your views on this?

By salome belasco | Blog | No Comments What is the relevancy of the MBA ITLP programme given the current economic climate?

This programme is highly relevant to Trinidad and Tobago and the region in terms of economic diversification, and plays a major role in all sectors from the perspectives of Trade liberalisation, digitisation, logistics and procurement.

Why should persons choose the MBA in ITLP programme?

Graduates from this programme obtained senior positions in the energy sector, other private sector companies            and in the public sector including the Procurement Secretariat. Also, some graduates obtained top positions                internationally.

How does the MBA ITLP differ from other supply chain management programmes?

3. Performance measured by the SSS and graduates obtaining  suitable jobs

4. Relevant and up to date research within the Supply Chain body of knowledge

How can this programme enhance someone’s career?

For more information on this programme you can contact Mrs. Shivana Hosein, Academic Advisor of MBA in International Trade, Logistics and Procurement at 645-6700 ext. 103 or email: admissions@lokjackgsb.edu.tt

Bureau for Intellectual Property of the Ministry of Trade, Industry and Tourism (MTI&T) of Suriname is ISO 9001:2015 Certified

The UWI-Arthur Lok Jack Global School of Business of Trinidad and Tobago has successfully executed a consultancy to provide training to the staff of the Bureau of Intellectual Property and to implement a Quality Management System to ensure that all their systems and  processes meet the requirements of the ISO 9001:2015 standard.

The project, which involved a collaborative effort of consultants from Trinidad & Tobago and Suriname, commenced in May 2018. The Team drafted IT procedures and QMS administration procedures, while developing quality objectives and manuals to allow the Bureau to operate at an international standard.

The project was funded by the Inter-American Development Bank as part of their commitment to the Caribbean and Latin American Region, to focus on improving governance, innovation, and competitiveness. The focus of this loan is to modernize the legal and institutional framework and promote private sector-led growth, diversification, and innovation in the Government of Suriname. Personnel of the Bureau of Intellectual Property pose with the Minister, Permanent Secretary and Professor Wayne Hunte.